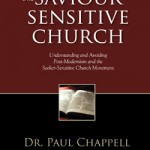 For the past twenty years there has been a movement in America called the Seeker-Sensitive Movement. The movement has been led by men who have championed a philosophy challenging pastors to consider the felt needs and desires of the unregenerate man as they created their worship services. In my opinion, this philosophy has led to a style of non-confrontational preaching, lessening of conviction and commitment by Christians, and ultimatly a weaker church in America today.

Dr. John Goetsch and I wrote a book together a few years ago called The Saviour Sensitive Church. The emphasis of the book was that we—as pastors and Christians—should focus on the Saviour’s desire for the church, not the desires of the unsaved man.

Recently, in a statement made by Greg Hawkins of the Willow Creek Community Church, he shared a study of their church which had been made by their staff. Bill Hybels, the senior pastor of their church and one of the great leaders of the Seeker-Sensitive Movement, admits in the study, “We made a mistake. What we should have done when people crossed the line of faith and became Christians—we should have started telling people and teaching people they had to take responsibility and become self-feeders. We should have gotten people and taught people how to read their Bible between services and how to do the spiritual practices more aggressively on their own.” He also stated, “Our dream is that we should fundamentally change the way we do church. That we take out a clean sheet of paper, rethink all of our old assumptions and replace it with new insights, insights that are informed and rooted in the Scripture.”

In essence, Bill Hybels is stating that because of the lack of depth of his own people, they are rethinking their strategies and determining to sink them more deeply in Scripture.

Obviously any movement away from Scripture is not a relevant movement when it comes to Bible-based ministry. Our only relevance is found in our accuracy to rightly divide the Word of truth.

Saviour-sensitive churches will be distinctive. They will have salt and light as characteristics of their ministries. They will often not be popular in the world in which we live.

Many in Bill Hybels’ own congregation were distressed when he interviewed Bill Clinton several years ago and seemed to “coddle him” when it came to the moral issues of his Presidency.

I must give credit to Bill Hybels for being honest enough to admit that he made a mistake and I also believe that any pastor or Christian who has been affected by the Seeker-Sensitive Movement should take time to consider the fruit of this labor. Is it truly producing Christians who are conformed to the image of Jesus Christ? Do we really believe that church services that resemble some type of a cross between a late night show and a grunge rock band are going to produce the spiritual leaders needed for revival in this day? Apparently, a few people are rethinking the whole concept. May God help us to stay true to the fundamentals of His Word in this day of confusion.