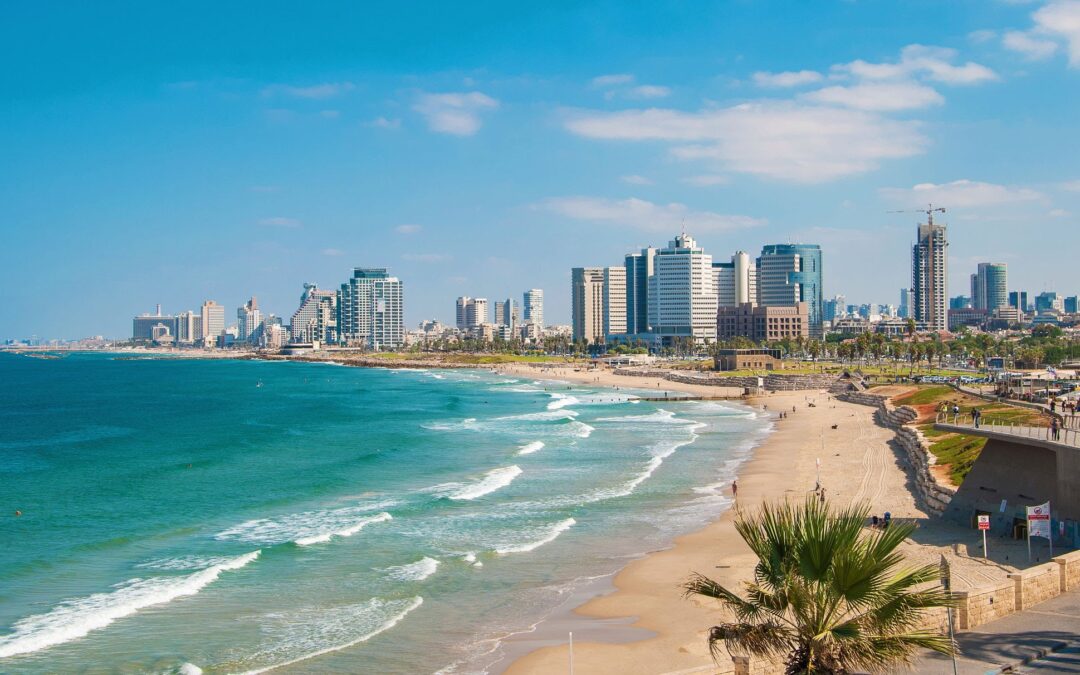 Joppa (Jaffa; Tel Aviv-Jaffa) – is Tel Aviv. This is the city seaport that Jonah fled to when running from God. In the Hebrew “Joppa” means – Yapho -fo’ or יפוא Yaphow’ (Ezr 3:7) yaw-fo’= “beautiful.”

In the Greek Ιοππη means the same, “beautiful.” Obviously, as you see this city on the Mediterranean Sea it is quite beautiful.

“Tel” – Hebrew, or “Tell” – Arabic – means “a ruined heap” – is in reference to archeological sites where different cultures have built on top of previous cultures and leave a hill like mound. This is what is called a Tel. When you see “Tel” in the name of a city it is telling you that it has ancient ruins. (Refer to your chart)

This city of “Japho” is the same as Jappa. The city is mentioned as part of the tribe of Dan’s inheritance of land given by Joshua. However, as the biblical record shows in Judges 18, the whole tribe migrated to the very most northern part of Israel, on the border with the Zidonians, who would greatly influence them and the northern tribes later during Ahab’s reign.

This became the primary port for Jerusalem during reign of Solomon. This is where they shipped in the cedar from Lebanon that was used for the building of the Temple.

2 Chronicles 2:16—And we will cut wood out of Lebanon, as much as thou shalt need: and we will bring it to thee in floats by sea to Joppa; and thou shalt carry it up to Jerusalem.

Where Tabitha lived, that died and was restored by Peter. From Joppa Peter went to Cornelius’ house in Caesarea to preach the Gospel, (Acts 10), thirty miles north on the coast from Joppa.

Acts 9:36–43—36 Now there was at Joppa a certain disciple named Tabitha, which by interpretation is called Dorcas: this woman was full of good works and almsdeeds which she did. 37 And it came to pass in those days, that she was sick, and died: whom when they had washed, they laid her in an upper chamber. 38 And forasmuch as Lydda was nigh to Joppa, and the disciples had heard that Peter was there, they sent unto him two men, desiring him that he would not delay to come to them. 39 Then Peter arose and went with them. When he was come, they brought him into the upper chamber: and all the widows stood by him weeping, and shewing the coats and garments which Dorcas made, while she was with them. 40 But Peter put them all forth, and kneeled down, and prayed; and turning him to the body said, Tabitha, arise. And she opened her eyes: and when she saw Peter, she sat up. 41 And he gave her his hand, and lifted her up, and when he had called the saints and widows, presented her alive. 42 And it was known throughout all Joppa; and many believed in the Lord. 43 And it came to pass, that he tarried many days in Joppa with one Simon a tanner.

Acts 10:1–24—1 There was a certain man in Caesarea called Cornelius, a centurion of the band called the Italian band, 2 A devout man, and one that feared God with all his house, which gave much alms to the people, and prayed to God alway. 3 He saw in a vision evidently about the ninth hour of the day an angel of God coming in to him, and saying unto him, Cornelius. 4 And when he looked on him, he was afraid, and said, What is it, Lord? And he said unto him, Thy prayers and thine alms are come up for a memorial before God. 5 And now send men to Joppa, and call for one Simon, whose surname is Peter: 6 He lodgeth with one Simon a tanner, whose house is by the sea side: he shall tell thee what thou oughtest to do. 7 And when the angel which spake unto Cornelius was departed, he called two of his household servants, and a devout soldier of them that waited on him continually; 8 And when he had declared all these things unto them, he sent them to Joppa. 9 On the morrow, as they went on their journey, and drew nigh unto the city, Peter went up upon the housetop to pray about the sixth hour: 10 And he became very hungry, and would have eaten: but while they made ready, he fell into a trance, 11 And saw heaven opened, and a certain vessel descending unto him, as it had been a great sheet knit at the four corners, and let down to the earth: 12 Wherein were all manner of fourfooted beasts of the earth, and wild beasts, and creeping things, and fowls of the air. 13 And there came a voice to him, Rise, Peter; kill, and eat. 14 But Peter said, Not so, Lord; for I have never eaten any thing that is common or unclean. 15 And the voice spake unto him again the second time, What God hath cleansed, that call not thou common. 16 This was done thrice: and the vessel was received up again into heaven. 17 Now while Peter doubted in himself what this vision which he had seen should mean, behold, the men which were sent from Cornelius had made inquiry for Simon’s house, and stood before the gate, 18 And called, and asked whether Simon, which was surnamed Peter, were lodged there. 19 While Peter thought on the vision, the Spirit said unto him, Behold, three men seek thee. 20 Arise therefore, and get thee down, and go with them, doubting nothing: for I have sent them. 21 Then Peter went down to the men which were sent unto him from Cornelius; and said, Behold, I am he whom ye seek: what is the cause wherefore ye are come? 22 And they said, Cornelius the centurion, a just man, and one that feareth God, and of good report among all the nation of the Jews, was warned from God by an holy angel to send for thee into his house, and to hear words of thee. 23 Then called he them in, and lodged them. And on the morrow Peter went away with them, and certain brethren from Joppa accompanied him. 24 And the morrow after they entered into Caesarea. And Cornelius waited for them, and had called together his kinsmen and near friends.

Zionist Pioneers of the 19th Century

The first Zionist pioneers of the 19th century entered the Promised Land through Joppa harbor. The Jews from Joppa moved a few miles north and founded the city of Tel-Aviv in 1909. This is now Israel’s largest commercial city under the municipality of “Jaffa-Tel-Aviv.”