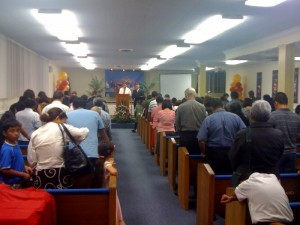 Ten years ago this week, Los Angeles Baptist Church opened its doors to the inner-city of downtown Los Angeles. And yesterday evening, I had the privilege of preaching for the church’s tenth anniversary celebration. As I looked around at the faces of joyful, growing Christians in this young church, I praised the Lord for the opportunity Lancaster Baptist had in planting this church.

Several years ago, some of our young men at West Coast Baptist college asked if they could begin door-to-door soulwinning in Los Angeles, a city of 3.5 million people that, at that time, had only one independent Baptist church. After months of faithful, weekly soulwinning by these students and many Lancaster Baptist members, a deacon in our church approached me about organizing and pastoring a church in this area.

Bro. Sal Menjivar, a very successful businessman, explained that God had laid it on his heart to sell his business and serve the Lord as a pastor. Bro. Menjivar, his wife, and his children moved from a six-figure salary to the inner-city—fifty yards from the police station. The sacrifices they made were tremendous, but ten years later, a healthy church of young Christians is weekly reaching people with the Gospel. And the Menjivar family has never been happier.

Last night I couldn’t help but wonder: What if Bro. Menjivar had not been sensitive to the call of God? What if he had not been willing to go? Christ promised “I will build my church” (Matthew 16:18), and He uses yielded Christians to do it. Is there a city waiting on you?