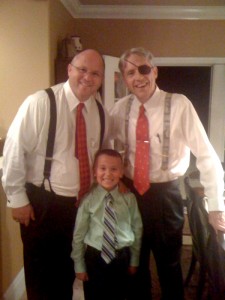 One of the highlights of Leadership Conference this year for me was honoring Pastor Jason Herring on Tuesday evening with the Faithful Church Planter Award—the first we have ever presented.

Jason and Suzie Herring  moved to Eagle, Idaho, in 2004 and planted the North Valley Baptist Church. Since that time, the Herrings have consistently seen people saved and baptized, and they have labored in discipleship and personal ministry to build strong Christians.

God’s will took a dramatic turn for the Herrings this past March when their four-year-old son Josiah was diagnosed with a grade four cancerous tumor. The Herrings prayed for a miraculous healing, but fifty-five days later the Lord chose to take Josiah home to Heaven. In the midst of tremendous grief, the Herrings have remained faithful to the Lord and to His church.

After the presentation of this award, Pastor Herring spoke for a few minutes about God’s grace in their lives and in their son’s life. He described the joyful relationship Josiah developed with the Lord during the last fifty-five days of his life. Often, his family would hear him talking to the Lord (sometimes even in his sleep) and saying “I love you, Jesus.” One of his favorite songs became “I Love You, Lord,” written by Ron Hamilton (“Patch the Pirate”).

While Pastor and Mrs. Herring, their son Jason II, and Pastor Herrings parents stood on the platform, Jason beamed at “Patch the Pirate,” seated on the second row. Later, he even got to have his picture taken with “Patch.”

Church planting families like the Herrings remind us all of the value of the local church. Even under the burden of unspeakable grief, the Herrings have remained faithful to their young church family. Their testimony compels all of us to press on, putting our hand to the plough and refusing to look back.