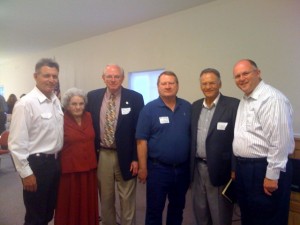 Last Friday I had the privilege of attending my grandmother Chappell’s ninetieth birthday celebration. It is hard to imagine all she has experience in her life. She was married to my grandfather at the age of sixteen, and together they literally cleared the land and developed the farm that has been such a great part of our family legacy.

Grandmother has endured many hardships including times of drought, recession, depression, and war. But the greatest decision she made in her lifetime was to accept Jesus Christ as her Saviour.

I thoroughly enjoyed seeing my aunts, uncles, cousins, and other relatives at my grandmother’s birthday party. But there were two hi-lights in particular last Friday. First, it was a great thrill in my heart to hear a man stand and tell about coming into my grandmother’s home in 1957. After a meal one evening, she took him (as a young teenager) into the living room, opened the Bible and shared with him how he could become a Christian. As this man, Mr. Brown, began to weep he said that was the greatest day of his life and that since then his life has never been the same. Others testified similarly how my grandmother had led them to Christ in her Sunday school class back in the 1950s. In fact, several months ago she led her new neighbors to Christ as they were moving in down the street.

The second great blessing was to hear our niece, Rachel (who is a student at West Coast Baptist College) sing “No One Ever Cared for Me Like Jesus.” Rachel did such a wonderful job, and you could sense the joy of the Lord in her life as she presented this message in song.

After Rachel sang, my grandmother told me that she remembered the first time she heard that song, how it convicted her heart of her need for the Saviour, and she was saved just a few days after hearing that song for the first time.

I suppose a lot of things could be said about our lives as we come to our final days, but to hear people say, “I will be in Heaven because of this person’s faithful witness” is an amazing thought. May we all learn a lesson from my ninety year old grandmother…the law of sowing and reaping still works!

He that goeth forth and weepeth, bearing precious seed, shall doubtless come again with rejoicing, bringing his sheaves with him. Psalm 126:6