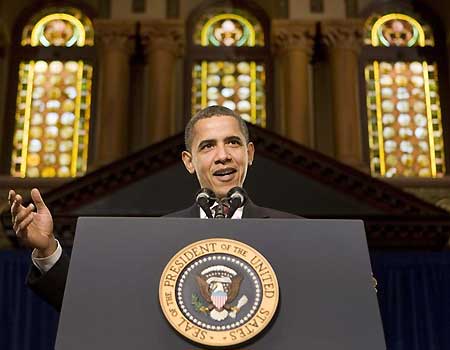 Any casual observer knows that the current trend in America is toward pluralism and away from our Christian heritage.  Psalm 33:12 says, “Blessed is the nation whose God is the LORD; and the people whom he hath chosen for his own inheritance.”

Leaders today with a bent toward pluralism often give credence and much attention to religious and social beliefs that absolutely deny the teaching of the Word of God. However, in an attempt to show their broad-mindedness and acceptance of all people we are seeing a movement away from the name of Jesus Christ.

A few days ago President Obama spoke at Georgetown University’s Gaston Hall. A monogram IHS, whose letters spell out the name of Jesus, and which normally perches above the stage in Gaston Hall where the President spoke, was covered over with what appeared to be black wood during the  President’s address.  University spokesman Andy Pino said, “In coordinating the logistical arrangements for the event, Georgetown honored the White House staff’s request to cover all of the Georgetown University signage and symbols.”

Past Presidents and Presidents’ wives who have spoken at Georgetown have not requested the covering of such religious symbols.  Would the President, or any other governmental leader for that matter, go into a place of worship for the Hindu, the Muslim or another faith, and cover the symbols of their worship?  Then why a symbol that represents the name of Jesus Christ?

I understand it is not the responsibility of government to exalt the name of Christ above all other names.  That is the responsibility of the local New Testament church and the people of God.  Colossians 1:18 says, “And he is the head of the body, the church: who is the beginning, the firstborn from the dead; that in all things he might have the preeminence.”  It is our responsibility as believers to give Christ first place in our lives, in His church, and in all matters of our faith and practice.

On the other hand, the removal of the Ten Commandments, the removal of prayer from public school graduations, and the covering of Christian symbols does not settle well with my spirit. As pluralism rises, there will be an attempt to place the name of Christ on the shelf with the names of all the other gods.

As Christians, we must first do our part to preach the death, burial, and resurrection of Jesus Christ around this world in these needy days!

Second, we must do our part to pray for our leaders and to take every opportunity to share the message of Christ and the uniqueness of His claims with each and every one of them.

And finally, may we pray today for revival in our land as we seek God’s face in this needy hour.