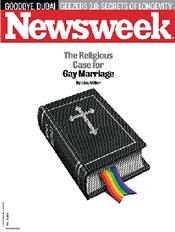 Last week Newsweek magazine came out with a cover article entitled “The Religious Case for Gay Marriage.” The author of the article attempts to use the Bible to defend gay marriage.

In one of the worst examples of modern day journalism I have ever seen, I could only be reminded of the Scripture in 2 Timothy 3:3-5 describing the last days, “Without natural affection, trucebreakers, false accusers, incontinent, fierce, despisers of those that are good, 4 Traitors, heady, highminded, lovers of pleasures more than lovers of God; 5 Having a form of godliness, but denying the power thereof: from such turn away.” The increasing attacks on the veracity of the Scriptures and the sanctity of marriage will not stop until the Lord Jesus returns.

The author further states, “To argue that something is so because it is in the Bible is more than intellectually bankrupt.” This type of an attack on the Word of God stems from a heart of unbelief and shows that when people choose to follow a path opposite of the Scriptures, they will place themselves above the Bible, and considering themselves to be wise, they become fools.

Gay rights activists are on the march and constantly calling for boycotts of companies who don’t support their cause. Now they are trying to tell us that the Bible changes with history.

I thank God that His Word stands like a rock undaunted in times like these. May we continue to speak the truth in love during this needy hour.