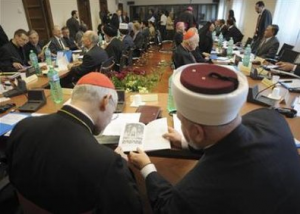 As I read the newspaper on November 4th, it was interesting to me to note that on the same day as our nation headed to the polls to cast their ballot for President, Catholic and Muslim leaders met together at the Vatican to discuss their two religions.

These leaders, including Pope Benedict, met with the purpose of focusing on the commonalities between their two religions, which combined represent over 2 billion followers.

The fact that these key religious leaders are willing to lay aside doctrinal differences and come together for the cause of unity is alarming and is a significant step towards a one-world religion.

As the meetings came to a close today, European newspapers hailed the success of the summit as “beyond expectations.” Another reporter credited the “Obama Effect” for the favorable outcome of the meetings since Barack Obama is a professing Christian from a Muslim family.

One Vatican reporter said these meetings represent the beginning of a “new chapter in a long history,” and Pope Benedict said the meeting was just “one more step along the way towards greater understanding.”

As Christians, we recognize that these events are simply setting the stage for a one-world leader. May we each vigilantly watch and pray as we continue to tell others of Christ in these last days.