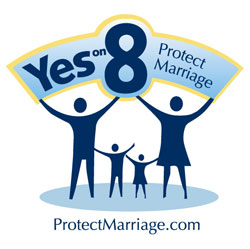 In November, we will not only have the opportunity to elect the next president of the United States of America, but in California we will once again have the opportunity to vote for the sanctity of marriage in our state. Proposition 22 was authored by our friend, state Senator Pete Knight, several years ago. Sixty-one percent of our constituents in California voted that marriage “should be between a man and a woman.”

Recently the radical state Supreme Court of California overturned the will of the people, and now we must seek an amendment to our constitution stating that marriage is between a man and a woman.

On my return trip from Ireland, I saw former San Francisco mayor and California house speaker, Willie Brown at the San Francisco airport. I took a few moments to share with him my biblical perspective on the subject of the family. He was on his way to USC to participate in a debate on the subject. I shared with him that the airplanes on which we were about to fly were engineered by experts for the purpose of flight. I told him that I did not want anyone changing the structure of that airplane before I stepped on it. I wanted the plane to fly according to the specifications. I shared with him that God has designed marriage to be between a man and a woman, and that if we begin to change the structure that God ordained, our state will face moral disaster in the days ahead. He listened carefully.

I believe, as Christians, we must preach the Gospel, and we must be the salt and light in this society.

Gay marriage is not about equal rights for homosexuals. Gay marriage is about using the power of the government to propagate a new faith. Individuals who oppose gay marriage are being viewed as hateful bigots, and one day, I believe those who propagate gay marriage will desire that those of us who hold a contrary view should be punished.

I was disappointed this morning to learn that Google, Levi-Strauss, and a host of other companies are donating large amounts of money to defeat Proposition 8. Please pray that Christians will stand up and fight for biblical values in this needy day.