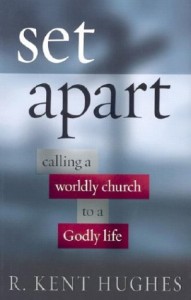 The existence and influence of the seeker-sensitive movement upon the American church is now no secret. For some twenty years, church growth experts have called upon pastors to amend and change the traditional worship styles and preaching dynamic, in order to “relate better to people.”

In my book The Saviour Sensitive Church I outline many of the weaknesses of the seeker-sensitive movement. One evidence of the failure of this movement is the fact that a lower percentage of people attend church in America today than ever. Those who do attend church are often unable to distinguish biblical principles, much less apply them to their lives.

The book written by Oz Guinness entitled Prophetic Untimeliness was unique in that it was a call from within, challenging the “evangelicals” to return to the fire and seperatistic stand of the reformation.

The book Set Apart by R. Kent Hughes is similar in its philosophy. In fact, Hughes says in the introduction of the book, “The contemporary evangelical church is not lacking for moral and spiritual instruction. It is lacking in his ability to remain uncontaminated by the unchristian thinking and morality of contemporary culture.” Hughes, then, begins to show how the contemporary church has been influenced by the philosophies of today’s society. Those philosophies include materialism, hedonism, viewing sensuality, pluralism, and even modesty!

In a sense, it was refreshing for me, as an independent fundamental Baptist, to hear someone from without our circle speaking against the influence of companies such as Victoria’s Secret or Abercrombie and Fitch on our nation and upon Christians today.

I highly recommend Set Apart as a book that will help pastors, parents, and educators identify some of the leading challenges against the church. In addition, the author gives good scriptural reference for combating the onslaught of wickedness in the day in which we live.