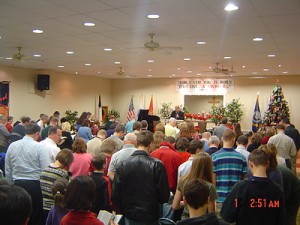 I apologize for the delay in communication the past several days. Terrie and I have had the privilege of ministering to a group of missionaries in Germany and preaching for the Rhine River Baptist Church with Pastor Tom Lancaster. It has been our privilege to see, first hand, the military work of our missionaries Brother Tom Lancaster, Brother Gary Craft, and others. We rejoice in the work God is allowing them to do amongst the men and women who serve our country overseas. Germany has nearly 65,000 US military stationed there and it was a privilege to meet many of these men and women and encourage them in their faith. I’m thankful for the tremendous kindness that Brother Lancaster showed to us. It was humbling to see a man in his late 60’s, serving the Lord on foreign soil with such passion as he does. It was a great privilege to get to know him and his wife better in these past few days.

After the meetings in Germany, we were able to catch a flight to Timisoara, Romania, and participate in the organizational service for the Independent Baptist Church of Timisoara. Timisoara is a city of about 500,000 people and is the place where the revolution against Communism was started, in large part, by Romanian Baptists seeking their freedom. I was amazed at the poverty that exists in Romania. They are well behind other European countries in their economic development. I was more amazed, however, at the great spirit of Tim and Debbie Tyler and their family as they serve in that country. 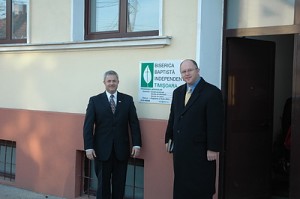 Tim Tyler and I attended Bible college together. When he invited me to attend the organizational service, I was uncertain if it would work; however, when I combined the opportunity to minister to a large number of missionaries from throughout Europe in Germany, as well as the organization service of a daughter church of Lancaster Baptist, I felt it was a wise investment of time. It was indeed a great privilege to be there.

The Tylers exemplify the spirit of Christ-honoring missionaries. Everything they said about Romania was positive. They spoke highly of the people, the food, and the culture. Their positive spirit was obvious in the hearts and lives of their children. Their son, John, led the singing. Their daughters helped pass out programs and keep the church clean. 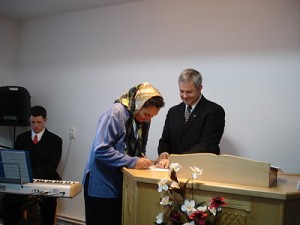 It was an amazing time to see many people sign the church charter. The signing of the charter indicates that they have been saved, baptized, discipled and are in full agreement with the doctrine of the church. Several of the Romanians had tears flowing down their cheeks as they signed this document.

Please pray four our European missionaries. Many of them have suffered a great setback because of the devaluation of the dollar. Our missionaries around the world need encouragement and prayers, especially during this holiday season.